Remember the old days of 500-watt amplifiers with hundreds of speakers attached. It was almost impossible to provide multiple buildings, public address systems.  The great thing about network-attached paging systems is that everywhere you have a network, you can install a small network-attached amplifier.

This means it’s just as easy to install a system in one building, multiple buildings, or buildings across the Internet.  Since the IP amplifiers and IP intercoms are just like any other device on the network, they can be connected through wireless radios. This article provides an overview of the technology and describes a number of new applications that weren’t possible using the older equipment.

How the IP Amplifiers Work 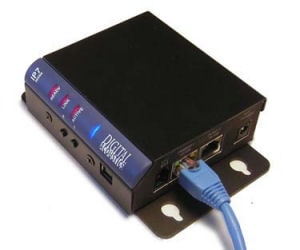 The IP amplifiers all have an RJ45 network connector and screw connections for multiple speakers. They are available in different power ranges.  You can get amplifiers that are powered over Ethernet (PoE), or higher-powered amplifiers (using separate power supplies) that drive many speakers.

Each IP amplifier or intercom contains a small computer that connects it to the network, decodes and amplifies the audio.  When you talk into the microphone on the computer, the audio is converted to a digital signal that is broadcast to the IP address of one or more small IP amplifiers.   This network-attached device decodes the audio and converts it back to an analog signal that is amplified.

This approach also provides higher reliability. The IP Amplifiers are associated with either an individual speaker or a small group of speakers. In the event of failure, only the speaker(s), associated with the IP module, will be affected.  The remainder of the paging system will operate as usual.  Because of health monitoring, if a module fails, the command center will be notified within 60 seconds of that failure, and repairs can be implemented.

The IP powered speaker is the easiest type of speaker to install, but they cost more.  It includes a built-in amplifier. There are several speakers available such as the Spkr-IP SYS1 wall-mounted speaker.   The SPKR-11-BD-P, from Digital Acoustics, is an example of a bidirectional speaker that attaches directly to the network.  The speaker includes a built-in 8-watt amplifier.  It’s very easy to install since all you need is a network connection that includes PoE. IP Intercoms are just as easy to install and use. The intercom module contains the amplifier, speaker, microphone and call button controls.  This is also a network-attached appliance that can be located anywhere on the network.

The same command control software is used to answer an intercom call.  Using a microphone connected to the sound card you can talk to one intercom or many.  With some additional SIP gateway software, you can also use a VoIP telephone to make a page.

The paging and intercom software runs on your Windows computer.  It is the point where you can make an announcement or talk to all the intercoms.  This easy to use software is also redundant.  If the command computer goes down, you can use a second or even a third computer as the command control.

General Paging and Intercoms:  IP paging and intercom systems are now replacing the old centralized systems.  Schools use paging for general announcements, class changes and emergency announcements.  The nice thing about these new systems is that they can be integrated with other applications such as School Bell Scheduling software. Selective paging: The IP paging system provides the ability to create many zones, and add new zones as needed. Each amplifier can be assigned to a unique zone.   In an emergency situation it may be advantageous to page to a specific floor or room, while not creating PANIC on the floor or in the building.  Each IP speaker or group of speakers, because it has an assigned IP address, can be dynamically accessed or grouped to define a zone.  You can also create a group that includes all the amplifiers so you can make a general announcement to everyone.

Adaptive Audio Paging:  The volume level of a set of speakers attached to one amplifier, can be automatically adjusted based on the background sound level.  If the kids are yelling, the sound level of the announcement gets loud enough so it can be heard.

Emergency Lock-down: The same panic button can be used to lock down the building(s).

Listen to audio from a remote location: Intercoms not only allow people to talk to a central location, but they also can be used to just listen to remote locations.  Intercoms have been used to silently notify the central security center that there is a problem.  For example, what can you do if an irate person comes into a principal’s office?  Well by pushing a hidden button on an intercom, the conversation in the room can be broadcast to the safety office.

Intercoms can control access:  An intercom can be used at the front door to monitor visitors.  Adding an IP camera allows you to not only talk to the person at the door but also see what they look like. This added door control can be used to increase convenience as well as increasing security.

Summary of IP Paging and Intercoms

Since the system is connected using the standard network, you can make pages or talk to intercoms at multiple remote sites.  The command control center can also be at multiple locations.

The system is easily expanded since all you do is add amplifiers and speakers as required. It even has the ability to be used with IP surveillance cameras, providing a total safety and control system.  A UPS can be used to assure that the network switches and computers used for the PA system stay available even if power fails.  Because this is a computer type network solution, wireless connections can be used to make it easier to install.

Need help defining your audio system, or how to integrate into your security system? Just give us a call.  We have experienced engineers available to help you define the right system for your application. We can be reached at 1-800-431-1658 (in the USA), or 914-944-3425 (everywhere else), or use our contact form.